After two wins to start the season this game was seen as a ‘free hit’ for The Brewers before two easier games versus Cambridge United and Cheltenham Town, but a brilliant finish from Jonny Smith saw Burton win their third straight.

Here are our Burton Albion match ratings from a memorable night at the Pirelli Stadium.

After three games, an opposition player is still yet to score past Ben Garratt. That stat is something the goalkeeper had to work very hard to protect as his defence was breached many times throughout the game. Garratt dealt with two one on ones and also made a great reaction save to deny Ross Stewart. It was another great performance from Garratt as he continues to keep the more reputable Ellery Balcombe and Kieran O’Hara out of the team.

John Brayford’s energy was excellent as he was able to contribute to both attack and defence. At 33 years old, Brayford would’ve been forgiven for showing some fatigue in his second game in four days but he kept going right up to the final whistle. His support of Jonny Smith down the right helped Burton sustain attacks and his defensive work was faultless as it often is.

Ryan Leak didn’t play as well as he has in previous games but still managed to secure another clean sheet. A misjudgment in the air almost led to a Sunderland opener and Ben Garratt was made to do more than he should’ve. Leak also wasted a chance to score the opener himself when he missed a free header.

Conor Shaughnessy did what he needed to do up against a dangerous Sunderland attack. Although goalkeeper Garratt was busy, Shaughnessy made no glaring errors and was dominant in the air. The Irishman won six of his seven aerial duels as he continued to fill in at centre-back for the returning Michael Bostwick.

Tom Hamer had another excellent performance and continued to prove himself as one of Jimmy Floyd Hasselbaink‘s key players. His marking of Lynden Gooch was perfect as he stopped the Sunderland winger from having any impact on the game. Hamer wasn’t as involved offensively but his fantastic defensive work earns him a high rating.

Michael Mancienne was brought into the line-up to add some experience into the midfield with Deji Osjilaja out injured. He delivered a performance that, while not perfect, was ideal for the type of game The Brewers were playing. He only completed 60% of his passes but knew when to clear the ball and what holes to fill to stop Sunderland from playing their football.

Tom O’Connor had his best game yet in a Burton shirt. In the opener against Shrewsbury Town, O’Connor struggled with the physicality of the game but after winning all four of his ground duels he looks to be adjusting nicely. The former Southampton man has been ever-present in midfield this season and will look to continue his improvement as the season progresses.

After struggling in pre-season, Jonny Smith has shaken off any worries over his form and shone in the opening three games. He looked dangerous all evening and there was no surprise when his effort from the top right of the penalty area found its way into Lee Burge‘s top left corner. He hit the woodwork with a similarly spectacular strike a few minutes later and continued to excite the Pirelli Stadium crowd. With his pace and dribbling ability, the sky is really the limit for Jonny Smith this season.

Since replacing Jacob Maddox early in Burton’s win over Shrewsbury, Joe Powell has looked fitter and more confident than last season. He was fearless in his dribbling and it was a failed dribble that fell to Jonny Smith for the only goal of the game. His improved fitness means Hasselbaink can now trust Powell to keep the same intensity all game and will likely see the former West Ham man start more games than his 23 last season.

Lucas Akins looked like his 2015 prime during the victory over Ipswich Town and continued his good form here. Akins did misjudge a header that sent Aiden McGeady through on goal but was consistently a threat going forward. He could’ve scored when Joe Powell slipped him through but his shot was well blocked. In recent years Akins’ close control and passing when dribbling have been poor but this season he looks to have fixed that issue and it’s helping Burton in a big way.

Omari Patrick is typically a winger but has been unselfishly playing striker to help with Burton’s injury crisis upfront. Patrick ran all night, whether he was closing down or running in behind. While scoring chances have been hard to come by, Patrick creates chances with his clever link-up play and good movement. Burton Albion has stayed perfect with no striker and Patrick is a big reason for that. 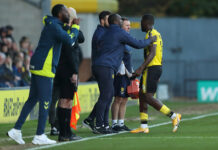 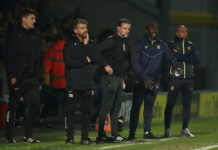 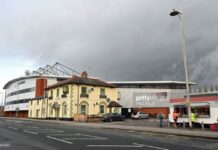 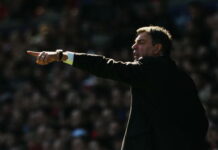