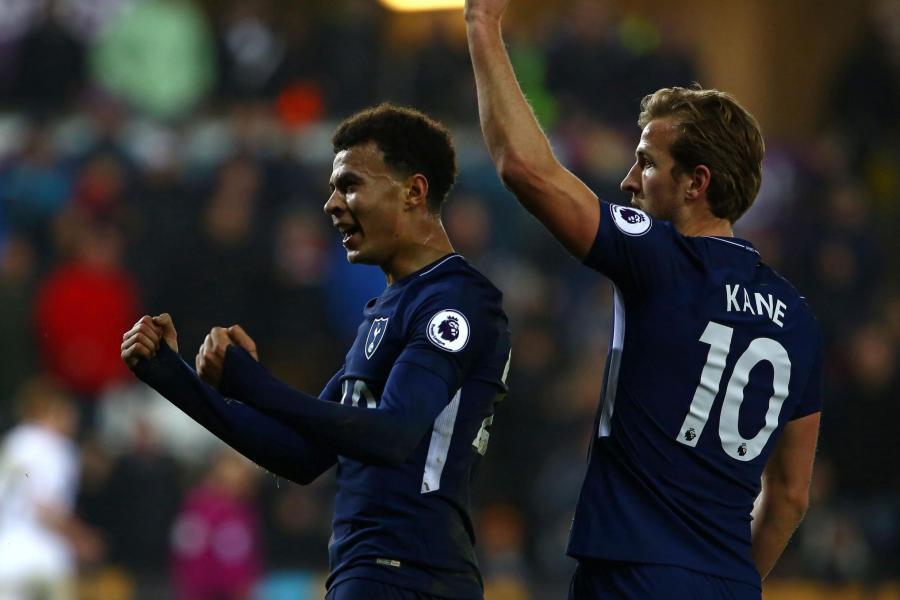 Spurs swam away with three points from a rain soaked Liberty Stadium, sinking the Swans and new boss Carlos Carvalhal into deeper water. The North Londoners beat the home side 2-0 with Dele Alli rounding off the win in the dying minutes of the game.

The win started with a little luck in the 12th Minute with former Swan Fernando Llorente’s head rising to meet a well placed Eriksen cross. A strike though that after the replay, showed him to be slightly offside.

The striker was given his first full start as talisman Harry Kane rested with a cold on the bench. Delighted to net only his second goal for his new club, he respectfully kept celebrations low key.

Unlucky though they were initially, the home side put up little resistance as Spurs dominated the first half hour of the tie, with eighty percent possession. The visiting Londoners’ only enemy the driving rain and wind that almost saw the game abandoned.

The home guard was as wet as the ball in a scene that was more like Swan Lake. Midfield maestro and Man of the Match Christian Eriksen peppered perfect passes through the puddle filled pitch. Only for the visitors to lack that finishing touch. The dark clouds seemingly blocking out Heung-Min Son, who failed to shine as he has of late.

An error from Kieran Trippier forced Lloris to defend his goal in a lone flurry from the home side. Renato Sanches later firing over a free kick saw the best of the Swansea attack.

The Eriksen – Llorente partnership nearly worked a second time just before the break as the newly signed Spaniard got a foot to driving free kick from the Dane. Fabianski relieved to see the shot pushed wide.

The North Londoner’s biggest enemy was the driving rain, but it was clear that beleaguered Swansea were more relieved to hear the half-time whistle.

To the dismay of newly appointed Carlos Carvalhal his side initially started with an approach as lacklustre as the first. They somehow though got the wind and crowd behind them, showing signs of a fight.

There was a more even feel to the tie, the half progressed with Dyer driving a shot wide. Davinson Sanchez narrowly avoiding a red card bringing down Martin Olsson on the edge of the area, having been booked early on.

Mauricio Pochettino wasted only a few minutes replacing Sanchez who has already served an FA ban. Spurs fans were compensated by the return of stalwart Victor Wanyama in his place. Eric Dier dropped deeper into defence to cover for Sanchez.

The wind had stirred the homeside’s spirit as Hugo Lloris had to push away a good effort by Luciano Narsingh. Ben Davies stepped in to deny Jordan Ayew who made an impressive looping run. Spurs survived the resulting corner.

Carvalhal had hoped for a repeat of the recent victory on the road against Watford, and eventually saw his side wake up toward the last quarter.

Sensing the danger and the awakening crowd at the Liberty Stadium, Harry Kane was brought on the 68th minute.

Tottenham defended another corner, before Kane played a superb overhead ball in to an advancing Dele Alli. Alli hit home second time when his initial strike found the legs of Fabianski. Settling Spurs nerves but sinking the soggy Swans, consigning them to an eighth home defeat.

Harry Kane it seems, will have to wait a little longer to equal Teddy Sheringham’s club record of 79 premiership goals. The goal ace had to settle for an impressive assist instead.

Carlos Carvalhal sees the bright side

Suffering their eighth home defeat, beleaguered Swansea and Carlos Carvalhal still sit at the bottom of the table.

Spurs move nearer to fourth spot with a game to play on Thursday against fellow Londoners West Ham.

New Swans boss Carvahal was quick to point out the failures of the officials, the decision of referee Bobby Madley and the tactics of his counterpart.

“There are two things, first the linesman has apologised after the game the decision. He says maybe he made a mistake. But Pochettino he was clever, because he took Sanchez off after a bad situation, and he knows why.”

The Spurs boss replied, “Of course after the first card it is then a difficult situation. The fans they change put pressure on the player, so yes after the foul then I had change. So I remove the player from the pitch. “

He went on to say that albeit with a little good fortune his team earned the victory.

“Yes it was little bit of luck in the win, we were a little lucky to score. After the conditiions, and 90 minutes it was clear that Tottenham were better. In the end, I think we deserved the three points.”

Tottenham now host London neighbours West Ham at Wembley in a crucial premiership tie. Both sides go into the clash with a recent win, and both will be vying for the points.

Carlos Carvalhal must now find a way to lift his Swans from the seat of the table but remains optimistic. He said of his side’s performance overall:

‘I am a happy coach with my team’

Swansea City manager Carlos Carvalhal: “What I’ve seen is that I have a team with character and quality. They are brave and they fight for the points with discipline. Let’s see if we can get one or two players in the market but if not the players we have will be brave and show commitment. I am a happy coach with my team. We can achieve points.”