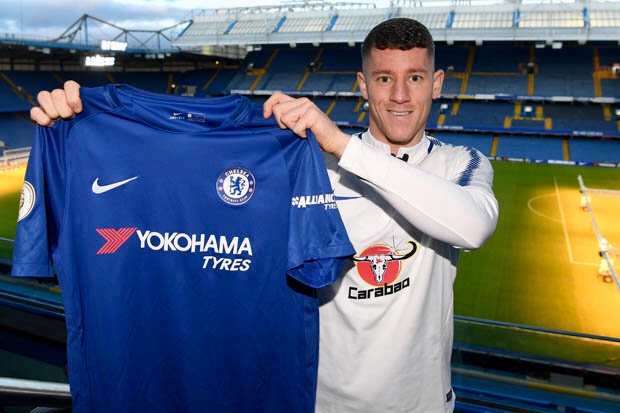 Chelsea have signed midfielder Ross Barkley for £15m pounds. The unsettled Everton midfielder has ended his long running will he/won’t he? transfer saga.

The former Everton star, yet to play this season following surgery for a hamstring injury. Though declared fit, he is said to having a medical on Friday at Chelsea in order to complete the move.

There was of interest from Tottenham in the last transfer window, but similar rumours have been quickly dispelled of late. The return of Erik Lamela and the advance of young Harry Winks may have influenced the thinking on that particular decision.

Ross Barkley, who has played for Everton for almost thirteen years, had previously rejected a move to Chelsea in August. Wages and price were rumoured to be an issue at the time. They were quick to renew interest when the window opened and this time landed their target.

New Everton boss Sam Allardyce had accepted departure of long serving Ross Barkley. He said yesterday that “It’s a matter of when, not if.” Barkley would be leaving the Merseyside club. Allardyce added: “The club were resigned to losing Ross before I got here. I can’t see that changing.”

It’s hoped Barkley will increase the strike force under Conte’s favoured 3-4-2 formation, possibly alongside N’golo Kante in the middle to make five. His gift for driving runs forward from midfield, dribbling, and decisive passes can influence a game.

His pace and youth could have been a factor, giving the likes of Cesc Fabregas a little healthy competition, and a possible stand in.

Danny Drinkwater would normally fill this role. Conte may however, be hoping to strengthen this area thus giving him more options. Barkely won’t be cup tied due to his injury and lack of play time either.

Are the ‘Pensioners’ seeking youth?

Despite being a Toffee from boyhood, Barkley is relatively young at 24. Chelsea may also be looking to increase their numbers in the England squad, with only Gary Cahill currently a Lion.

Though he hasn’t played any match football for a considerable timespan, Barkley had been compared to Paul Gascoigne before his injury setbacks. Showing similar passion and temperament. Antonio Conte and will be hoping he can fully develop, now his injury and transfer woes are over.

Conte said of the move “For sure we are talking about a young player, an English player. He can have good prospects for Chelsea.”

He was quick to point out though that the Chelsea fans may not get to see their new acquisition in the shirt just yet. He added;

”Yes, he’s a good prospect, but at the same time it will be very important to understand when he can recover from his injury.”

Can he live up to the legacy of Lampard?

Barkley will wear the number 8 jersey, formerly occupied by Chelsea legend Frank Lampard. This has already evoked a Twitter response from some Chelsea fans, not convinced he is yet worthy of the honour.

However, following his medical, Ross Barkley will have swapped one blue shirt for another. Perhaps developing into the star player he’s shown the potential to be.

CONFIRMED: Ross Barkley has signed for Chelsea on a five-and-a-half-year deal and will wear the number 8 shirt. #cfc pic.twitter.com/9mk4kNNMuE