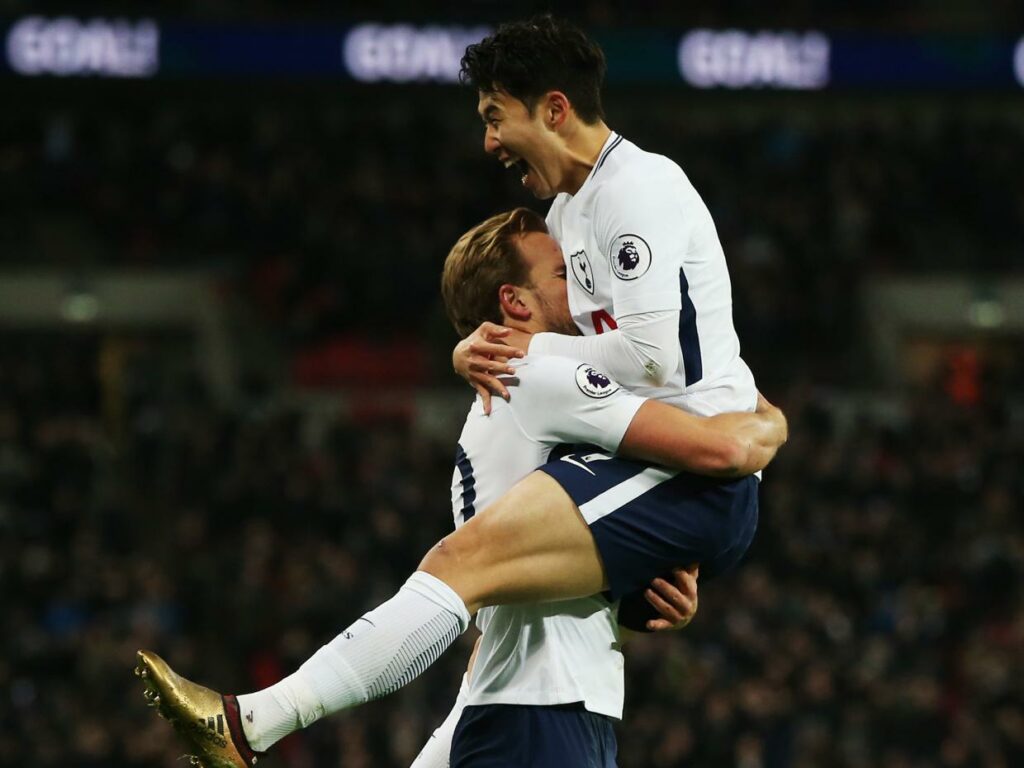 Kane and Son warm up Wembley

After a start cooler than the bracing Wembley air, Spurs swept aside Stoke with a 5-1 battering. Harry Kane and Son paired up making double trouble for struggling Stoke.

Thus making Tottenham the first ever team from the top flight to win four consecutive matches against the same opponent by four or more goals.

The goal rout started with a stroke of luck, when in-form Heung-Min Son latched on to a Dembele pass and broke down the left side. His cross was deflected by Stoke’s Kurt Zouma, onto unlucky Ryan Shawcross, and into the net. Spurs were 1-0 up in the 22nd minute.

The goal if fortunate, was the catalyst that fired Spurs back to the deadly one touch attacking football that has evaded them in the Premier League of late.

Harry Kane and Son on the run

It was Harry Kane and Son again pairing beautifully to put the England striker through. With only ‘keeper Jack Buckland to beat, Kane uncharacteristically dragged it just wide of the net.

Only a few minutes later, Son raced up the pitch to fire a shot at Butland, who pushed it clear. If he had looked up before shooting, he would have seen Christian Eriksen was in a much better position. Nevertheless, Korean star Son was playing out of his skin, causing grief for the Stoke defence.

Eriksen had the chance to compensate when Spurs were given a free kick just shy of the half hour. He struck a beautiful ball denied only by a superb Butland save.

The home side continued to press and dictate the game. Stoke adopting the same tactic of the West Brom’s and Burnleys of late, somehow managing to hold further fire until the break.

It didn’t take long after for the rampage to begin. In the 52nd minute, a deft Harry Winks move and sublime Dele Alli pass was more reminiscent of the deadly side of Spurs, and Alli. Putting Heung-Min Son through and clear to net his sixth goal from his last nine starts for the North London side.

A well deserved reward alongside his Man of the Match title. That’s two stellar performances inside a week for Son, who shone brightest for Tottenham again.

Son’s goal was the catalyst for Spurs to then field the kind of display that unravelled the Real Madrid defence, with Dele Alli looking more dangerous than of late. The North Londoners now in controlled the game, dominating possession over a poor looking Stoke.

Kane back for seconds

Back on track with a good win. Got to take that into the busy period coming up. ⚽👍 #COYS pic.twitter.com/hv5tBHs9Zc

Christian Eriksen added to Mark Hughes woes beating Butland to a fifth with a beauty in the 74th minute, on a day the Stoke manager and travelling fans would rather forget.

A club record for Shawcross

There was at least one moment for cold Potter’s fans to cheer on their Wembley day out, when Ryan Shawcross atoned his previous error. Scoring to make it 5-1 just on the 80th minute. Handing Shawcross his own club record, becoming the first ever Stoke player to score at both ends in a Premier League tie.

Spurs also gave a cameo role to long lost Erik Lamela, who quickly reminded fans of his touch and desire for the team. The defence also showed prowess without injured Toby Alderweireld and suspended Davinson Sanchez. All good for Pochettino, with Victor Wanyama on the mend and Sanchez now available.

The ‘Harry Kane and Son team?’

Club and fans will be enjoying that Heung-min Son is adding to the tally. Further dispelling the disrespectful ‘Harry Kane Team’ tag awarded them by one Pep Guardiola.

Not so for Mark Hughes, who could take few positives from his teams disastrous away day performance. His side had come into the game with a win against Swansea, so hadn’t anticipated a drubbing.

Speaking to the BBC after the match, Potter’s manager Mark Hughes said: “It’s not good enough doing ok for 45 mins. We couldn’t deal with Tottenham’s power and pace, and struggled in one on one situations, we needed to get tighter. Today will damage our confidence. That is the worry for us.”

Delight though for Mauricio Pochettino, who saw his side once again warm to Wembley. Since the 4-1 hammering of Liverpool, dull draws, dropped points and narrow Premier League wins have frustrated home fans.

Spurs boss Pochettino admitted post match to BBC Sport that his squad could have been distracted by their European success. He said: “After last season, the team was determined to show they can compete in the Champions League. Then when you mix this with the Premier League, maybe it was a bit of a distraction.”

He confirmed his side have not given up on the League, and will continue to press for the top. At the very least for a Champions League spot. Ergo Spurs will be seeking to make up for their stuttering home start.

He went on; “Concentration between now and the end of the season is important if we want to finish in the top four. Today the team showed their true quality. “

Spurs face Brighton on Wednesday where they and fans will be looking to accumulate three points in their temporary Wembley home. After a performance like that, they should expect no less.