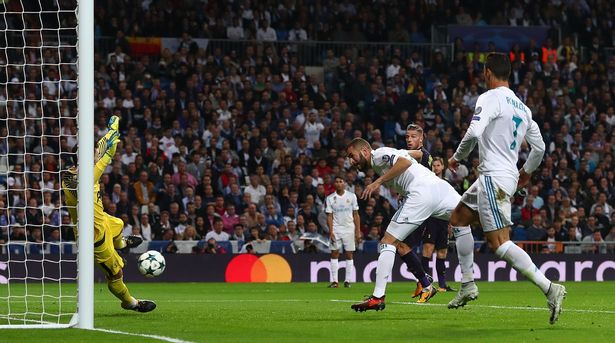 Hugo Lloris is the Real hero

Hugo Lloris was the Hotspur hero in a fantastic Group H clash between Real Madrid and Tottenham at the Bernabeu Stadium. With two wonder saves, and a few others, he led his team to a draw in an exciting tie.

Harry Kane may be the Tottenhams’ biggest star, but it was captain Hugo Lloris whose lightning left foot then hand, gave the visitors a well earned draw.

The much anticipated tie didn’t disappoint, with both sides immediately pressing. Christiano Ronaldo broke away in just the second minute only to be blocked by Jan Vertonghen.

Swiftly followed by Llorente playing on Christian Eriksen to see Spurs’ first shot on goal go wide. Tottenham showed no signs of being overwhelmed by opponent or occasion and looked comfortable through the first half.

Solid performances from Sanchez, Vertonghen and Alderweireld saw the defensive dam stay strong against the Real river of attack.

Benzema minutes later much to Spurs relief, missed an open goal. The first five minutes setting the pace for rest of the half.

The visiting fans could be heard loud and clear, as Spurs without key players  Mousa Dembele, and Victor Wanyama, held the home side in midfield.

Harry Winks played the game of his life, covering impressive amounts of ground, constantly playing on the front foot. At times, when there was hesitation from Eric Dier, the 21 year old played a key role in midfield. Head up, calm, and mature.

Not the composure expected of a lad making only his fifth start for the North London side, in one of the biggest football arenas in the world.

Moussa Sissoko also put in another good shift, perhaps enjoying the song that the once critical Spurs fans have given him. Finally it seems giving him the confidence to make him a member of the Spurs team. Again, showing the fans, that in Pochettino they should trust.

Spurs took a surprise lead in the 37th with an own goal by Raphael Varane, that had looked as if Kane had a touch on it from a well placed Sissoko pass.

Much to the dismay of his teammates, a needless challenge by Serge Aurier on Toni Kroos in the area gave the home side a penalty. Alderweireld had it covered, and Kroos had no real clear shot on goal.

Christiano Ronaldo quickly converted it to level the score, prompting the home side to come back on the offensive.

Hugo Lloris pulled off a his first wonder save when Benzema found himself in front of goal on the 53rd minute. The swift foot of the Spurs keeper spared his Spurs a 2-1 deficit from just 4 yards out.

Serge Aurier minutes later broke on the wing to make a fantastic run into the box, only to find no support in the area.

Lloris again then again pulled off a leaping hand wonder save to deflect a  beautiful curling shot by from Christian Ronaldo, bound for the top corner of the net.

Kane nearly made it Spurs’ night when he saw his header pushed wide by Keylor Navas, who also put in a classy performance.

In a game was billed as the big stand off between titans Harry Kane and Christian Ronaldo, but as neither star shone brightly, it was the goalkeepers who lit up the Bernabeu.

It was a tough ask for Spurs. Madrid had lost just one of 37 games in the Champions League to AC Milan back in 2009.

The Tottenham fans are delighted with the away result, if not smarting from the denial of an obvious penalty. With Borussia Dortmund drawing against Cypriot side Apoel Nicosia, it’s likely both sides will are through to the next stage.

Spurs will now welcome Real Madrid to Wembley in two weeks time for the second leg. The match which has now sold out, and promises to be another thriller. With both sides likely through and the pressure off, the skills of both will hopefully on display.

Neck and neck in group H

Both teams lie at at the top of Group H matched in games and goals. Mathematically it is possible for one to miss out but highly improbable.

It was more than just a cup tie for Mauricio Pochettino and his men. It was a statement. Tottenham are back, and will continue to build on the momentum built so far by the Argentinian manager.

He believes. His team believes, the fans believe. Now it seems,finally, do the media, and those that have long overshadowed the North London side.

A new stadium growing alongside a young hungry team, a manager that just pledged his allegiance to it. With legions happy fans, the Tottenham Army are march once more.

Harry Kane speaking after the match to BT Sport, said;

‘It puts us in a great position, we play them again in a couple of weeks. It will be tough, but we’ve shown that we can handle it at this level, and that’s what it’s all about”

Speaking to the Guardian at the after match press conference, Mauricio Pochettino was asked what his teams thoughts are about going through to the next stage replied;

“We haven’t had time. What’s clear is that there are three matches in front of us. We have a good position with Real with 7 points and Apoel and Dortmund with one. We have to compete, and we haven’t done anything, until we’ve done that’

“Hugo was fantastic. He deserves big praise from everyone he showed his real level. You had the opportunity to see that Hugo Lloris is one of the best goalkeepers in the world.”

He spoke of his pride in his team “A brilliant effort, and their belief. It’s important to congratulate the players. I am so proud of the effort from them”

This is the best opportunity Tottenham have had for many years. One they will relish. Going into their home tie, they must remain consistent. This won’t be easy for Spurs, with some tough league matches imminent, including Liverpool.

They have a real chance now to capture some silverware, to justify their achievements in Europe and domestically. The next few weeks may determine the strength of surge by Tottenham Hotspur.

Spurs meet Real Madrid again at Wembley for the second leg of the Group H tie. The game is on Wednesday, November 1st, at 19.45pm