Hasselbaink enjoyed a great spell at Burton in 2015, securing them promotion to League One, but this job is different in every aspect. We take a look at how he has influenced such a dramatic turnaround.

How Has Hasselbaink Transformed Burton Albion?

Burton had one of their best January windows ever. Nine signings came through the Pirelli Stadium door and all of them have contributed to the turnaround. Centre-back Hayden Carter was the first one through the door, on loan from Blackburn Rovers. Carter scored the winner in Hasselbaink’s first game against Gillingham and has helped keep three clean sheets. Another loan signing Sean Clare has added some much-needed fight and height to a midfield that was lacking it. Winger, Jonny Smith was another good acquisition, he came off the bench to net the winner against Hull City.

All the signings have helped make Burton a feisty, hard-working, and physical team that can grind out results, something that was a characteristic in Hasselbaink’s League 2 winning Burton side. The two free-agent signings of winger Danny Rowe and defender Michael Mancienne will only strengthen the side even more.

Burton, like most clubs, was hit very hard by the ongoing pandemic. Ex-manager Nigel Clough stepped down in the summer to help keep the club afloat. So where did the money for these new signings come from? Nine players left the club which freed up a lot of wages and the important thing was, none of them was too important.

Stephen Quinn, Neil Eardley, Steven Lawless, Indiana Vassilev, Jack Roles, and Niall Ennis all struggled for minutes and form. Charles Vernam was perhaps the most surprising departure but even he struggled for goals, only scoring twice in 14 matches. 18-year-old goalkeeper Teddy Sharman-Lowe never threatened the first team and was sent to Chelsea, who brought him from Burton in the summer. Hasselbaink got rid of players that didn’t suit his style and preferred personality and as a result, has a squad well suited to his demands.

Getting a Helping Hand

The former player wasn’t the only new coaching appointment. Dino Maamria also joined as an assistant manager and he’s been key in turning this around. Maamria is a survival specialist, having saved struggling sides Oldham Athletic, Stevenage, and Southport in the past. He has helped install confidence and belief into the Burton players who looked short of it. The Tunisian also helped bring in Jonny Smith and young full-back Tom Hamer, who he coached at Oldham.

Having someone who is used to relegation battles has given Hasselbaink some much-needed knowledge of how to get teams out of the drop. Maamria may have also given the Dutchman some fresh ideas, Hasselbaink struggled in his two jobs after his first stint at the club in Queens Park Rangers, and Northampton Town. A return to Burton has seen Hasselbaink return to his tactical best and Dino Maamria deserves just as much credit.

A Solid Defensive Base

Burton had the worse defence in the league before Hasselbaink’s arrival. They had failed to keep a clean sheet all season. They broke that streak in the former Chelsea striker’s first game in charge. The clean sheet against Gillingham only came because of some top goalkeeping from Ben Garratt but the 27-year-old has had less to do in recent games due to a considerable defensive improvement.

The key to this is the new signings of Hayden Carter and Josh Earl. Left-back Earl, who’s on loan from Preston North-End, has all the attributes to be a top full-back. He’s tall, fast, and strong which helps him deal with all the types of wingers he faces.

Carter has been the perfect replacement for Sam Hughes, whose loan spell from Leicester City was cut short by an ACL tear. Hughes was one of the only good points from Buxton’s spell in charge but Carter has made his absence unnoticeable.

Burton conceded 2.3 goals per game under Buxton but in Hasselbaink’s first four games they’ve only conceded one altogether. The defensive improvement is amazing but Hasselbaink is still yet to get Burton fully firing offensively so the defence must stay compact for the run to continue.

Burton’s midfield was a serious issue. It was providing next to no protection for the back four and struggling to create anything in attack. 18-year-old Ciaran Gilligan got thrown in at the deep end and while he led the team in tackles per game (2.4), his lack of experience was clear to see. Hasselbaink has taken him out of the firing line for the time being. Stephen Quinn clearly lacked the physical attributes required as his age caught up with him and he was loaned to the old boss Clough at Mansfield Town.

The Dutchman has found a new identity in Burton’s midfield. Sean Clare is as good as a tackler as Gilligan but is much better on the ball and a bigger presence, helping Burton control the midfield. He constantly intercepts passes and patrols passing lanes, stopping opponents from breaking through.

Ryan Edwards has been revived under Hasselbaink. Not only did he score a fantastic solo goal against Northampton but he also helped guard the defence alongside Clare. Playing in a pivot role instead of on the wing where he was sometimes used by Buxton, helps Edwards show off his battling qualities and frustrated the opponent. Edwards scored five goals and got five assists last season and Burton will need him to replicate these figures if they want to stay up.

Burton Transformed in Hopes of Survival

The win over Northampton took Burton within two points of safety. This is an excellent turnaround so early into mission impossible. Hasselbaink and Maamria are going to encounter struggles as opponents start to prepare for the new Burton but if they keep up their fighting spirit and positive attitude then they have a great chance of leading Burton to safety and maybe even more next season. 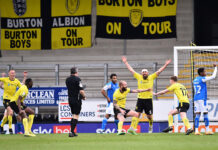 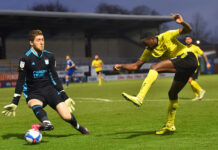