“Leeds United are devastated to learn of the passing of club icon Norman Hunter at 76.”reads the club statement. According to the club Hunter was rushed to the hospital last week after he had contracted with corona virus, “Norman was taken to hospital last week after being diagnosed with COVID-19 and despite continuing to battle and the best effort of NHS staff, he sadly lost his fight earlier this morning.” Continued the statement.

Norman was born on Friday 29th October 1943 in Eighton Banks, County Durham, Hunter left school at the age of 15 to become an electrical fitter. He was scouted by Leeds when he was playing for Birtley Juniors and following a trial he was offered a place on club’s ground staff. He made his debut for Leeds against Swansea Town at the age of 18 in 1962 September and helped them with a 2-0 win and by then he would become one of the greatest the English football has ever seen.

He made 726 appearances for the club over a 14 year period. He also helped them rise from Second Division and played an important role when Leeds became the champions of England twice. Norman was also in the class of 1966 England world cup winning squad.

Rivalry clubs also sent their condolences to the Leeds legend. “ A great competitor. A great player. A great rival. Rest In Peace.” Twitted Liverpool. “The thoughts of everyone at Spurs are with Norman’s family and friends, as well as everyone at @LUFC, at this incredibly difficult time.”
Main image credit:
Embed from Getty Images 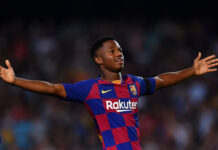