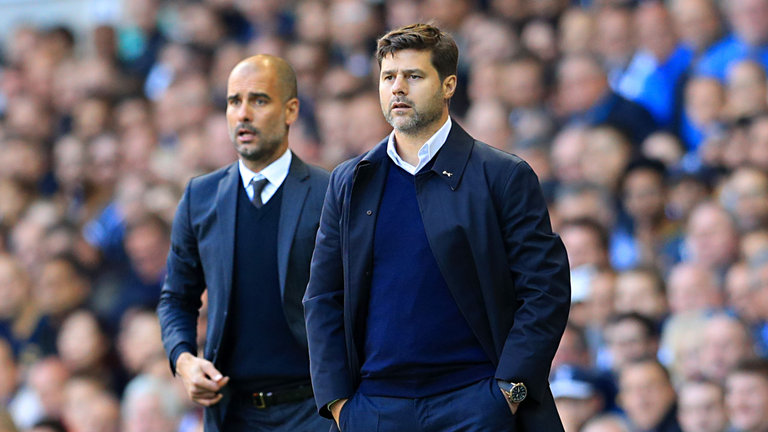 The North Londoners travel North to the Etihad to face leaders Manchester City in a vital Premier League clash on Saturday. Pep Guardiola and his rampant home side are unbeaten in the Premier League.

Tottenham will be looking to add another three points to their tally after beating Brighton 2-0 in uninspiring but vital win. Uninspiring, but nonetheless seeing the hosts win three consecutive games at Wembley in a week.

Though Pep Guardiola’s Citizens will no doubt start as clear favourites, Spurs have showed form as deadly as their opponents. With the 4-1 battering of Liverpool, Stoke and not withstanding their Champions League performances, Pochettino will not relinquish any points easily.

Rough on the road?

Away League form against top six clubs however has being less than admirable. Pochettino will be looking to show that this isn’t a trend. Though dignified in his response for Pep’s words, simply labelling them: ‘Disrespectful and sad.” There is no doubt he would relish the victory as well as the points.

With the tussle below City for Champions League football hotting up, it could be said the Argentinian manager needs the points more. Arguably, as expected losers, he will not be unhappy Spurs start the underdogs. The pressure then being on his counterpart.

Mathematically the league title has by no means been settled, there is still all to play for Pep Guardiola and his men. Posterity as well as points. He will want to extend the run and take another North London scalp. Tottenham’s rivals Arsenal didn’t fair well in their visit to the Etihad, losing 3-1.

Having received a cool reception by most for his flippant ‘Harry Kane Team’ comment, Guardiola will looking to prove his remark on the pitch and no doubt the press.

He will also not have forgotten as he was reminded at the time, that a year to the day he made his comment, Spurs had beaten City soundly 2-0 without their aforementioned talisman.

Another important win at home tonight now onto a big game at the weekend… 👍 #COYS pic.twitter.com/GuZiNNwpSu

Whilst Harry Kane was a little muted on a wet Wembley Wednesday, Heung-Min Son shone again through the North London rainclouds. The young Korean is quickly amassing a goal tally, and has been in sparkling form for his club. With Son, Dele Alli, Eriksen and now Erik Lamela available, going forward isn’t a concern for Pochettino.

Though the Spurs’s defence did a sterling job against Brighton, they will be facing a different entity at the feet of the City strikers.
With stalwart Toby Alderweireld out until February, and Rose not yet on full steam, Spurs will be hoping for the return of Victor Wanyama, due back in his boots at any time.

Davinson Sanchez will be available following his one match ban, much to the relief of Pochettino. The young defender has settled impressively and calmly into his role. His defensive statistics are astounding for one so young playing in a new league and land.

It’s unclear whether Ben Davies or Danny Rose will start the tie, but both will be on the coach. The same could be said for fitness struggling Mousa Dembele who will likely share his spot once more with young Harry Winks.

Pep Guardiola faces the tie without Vincent Company who was taken off during the Manchester Derby. John Stones is much nearer a return, but still unlikely to start. Benjamin Mendy remains unavailable until spring with a knee injury.

Who will be left-back?

Manchester City like their opponents, go into the clash already having won midweek. On a slightly more convincing level than Spurs, sweeping Swansea aside with a 4-0 thrashing. Thus creating a new Premiership record of fifteen wins on the spin.

Mauricio Pochettino and the Spurs following will not be fearing their opponents. Albeit their win over Brighton wasn’t as impressive as the drubbing given to Swansea by City, Spurs have shown the same devastating form when playing the likes of Borussia Dortmund and Real Madrid.

There was similar treatment for Liverpool and Stoke at Wembley. The better the team the better the performance has been the case so far for Pochettino’s men. Lacklustre efforts have been mirrored with the lower level challenges presented by the likes of Crystal Palace and Brighton.

Ergo, Mauricio Pochettino refuses to accept that their task and result are as pre-destined as widely envisaged. He told reporters after the Brighton game;

“Yes, we are people that enjoy it because it’s a fantastic challenge to play Manchester City. We are going to play with the best team in England, and one of the best teams in Europe.” A respect filled remark, and perhaps a deliberate and sly swipe meant to contrast Pep Guardiola’s disrespect.

”In football, anything can happen.”

In his growingly familiar pragmatic and ambiguous way he added about this team’s chances:

“I am positive, we go to Manchester City trying to win, and then football is football and anything can happen.”

Pep Guardiola also spoke of his team’s achievements and ambitions and the up and coming clash with Spurs. He told Daily Mail sport following the Swansea game;

“Tottenham with Chelsea is the best team in the way to play football. They don’t expect the other ones, they want to make those own game. It is another amazing test for us. It is every three days. After Tottenham it is Leicester. “

He added of his opponents, “We are ready to face them and keep to that level we have shown in that last period.”

Whatever the outcome, North v South clash, will the most anticipated match this weekend on offer.