A quick look at the summer 2019 transfer window reveals two opposing visions on what the future of Real Madrid could become.

Real Madrid’s Florentino Perez and Zinedine Zidane are at different points in their careers and it shows in their transfer business. Perez’s Madrid legacy is already set in stone and all that’s left is to transition out gracefully.

“Papa” Perez as affectionately referred to by the Los Blancos faithful is 73 and is clearly thinking of his legacy. The influx of so much young talent (especially Brazilian) speaks of a man establishing the identity of his last great team. A team set up for a lot of future success who should be going through growing pains right now. While this is an admirable dream and a very respectable plan it greatly undermines the current manager’s views and beliefs on what the team should be. Whether Zidane likes it or not the Joga Bonito era is already being established and while he may like these players and feel they have potential they are not traditional Zidane signings.

Change of an Era – Florentino Perez

This seasons Real Madrid side is an effective but weirdly assembled squad. Some players are ready now contributors in the middle of their primes while other’s best days are still ahead of them. Such a squad is usually assembled by a manager carrying out a soft transition between era’s (examples of such transitions would be Sir Alex Ferguson 1995/96 season or Sir Alex Ferguson 2005/2006 season).

Yet it’s hard for anyone to believe the French manager is responsible for the young influx of raw talent flooding the Bernabeu. That’s coming from above the management. The 48-year old is a Galactico through and through. He was brought in as a Galactico and returned a decade later to coach a team full of Galacticos. At no point in his career has he ever been considered a moulder of talent. Zidane is known as the premier ego guru working in Europe today, uniting a dressing room full of alphas under one vision of European dominance. To suddenly switch from such a “WIN-NOW” attitude to a patient, caring and nurturing management style would be a hard transition for any top class manager but it must be more difficult for someone who is being forced to become this style of manager.

An established Galactico signing is Eden Hazard or Toni Kroos, one of the world’s best players who suit the type of player, fans of the club are used to signing. In this new age, the young Galactico signings are the likes of Eder Militao, Ferland Mendy or Luka Jovic. Proven young talents who have already established themselves and can justify and make the leap. A Galactico is not an 18-year-old Brazilian talent who has yet to even score in the Brazil Serie A let alone the Copa Libertadores.

Zinedine Zidane never left his “WIN NOW” mode, he never has, this mentality stretches all the way back to when he broke into the Cannes squad as a bright-eyed 18-year-old midfield tempo genius. Wherever he’s gone that team usually enters a golden period be it as a player or in his young managerial career, kicking success down the road does not exist in Zidane’s approach to the game.

The French star is one of the greatest players in Real Madrid history and is on course to be their most successful manager as well. Miguel Munoz has him beat on longevity but he’ll get there but even that impressive resume pales in comparison to what Florentino Perez has built at Madrid. Perez ushered in the Galactico era and set the bar of what success was at Real Madrid and has never waivered under the pressure to meet such lofty expectations. He has poured over a billion dollars in transfer fees over his era. No price was too high. Perez’s last action is to reset the transfer tone he firmly established to stabilize Madrid’s spending habits. We all know pockets go dry but a solid infrastructure of identifying great young talent, signing them cheap, coaching them up, having them grow with the fans and blossom into homemade Galacticos is the way to go. The 73-year old chairman is reestablishing how this club functions while balancing out making his manager happy by signing ready-made stars for his coach to still compete now with. This is a difficult balancing act and eventually, one side will win out (except it already has).

The approach shows how Perez is thinking ten to fifteen years ahead and has turned to extensively scout South America in his need in for some samba magic in the squad. Joga bonito is the identity he is trying to implement and keeps buying all the most exciting young talents in South America and Europe who can bring this dream to life. Zinedine Zidane like the rest of us lives in the present, what good is a 27-year-old fully formed Vinicius too him now? He works with the inconsistent wonderkid now and is fully aware that you can’t win anything major with inconsistent players yet the squad will soon be full of them. Sergio Ramos, Luka Modric, Toni Kroos and Karim Benzema are the last true staples of that all-conquering Madrid side, is Zidane ready to be told no when he requests players of equal quality replace them?

The current pandemic makes me factor in an extra year but this upcoming Summer Windows will determine where this teams future truly lies. Zidane would obviously prefer to invest now and open the cheque book to return to the top as they line up Erling Haaland, Kylian Mbappe, a right-back and Paul Pogba as he gears up to contend immediately. While Perez would prefer the development of the young talent on hand, one of Haaland or Mbappe, some kid from Castilla at RB and Eduardo Camavinga as the fully double down on conquering the latter half of this decade.

Time will tell who will win the tussle between present and future methods but will it ultimately rise Real Madrid back to the top or to the bottom? 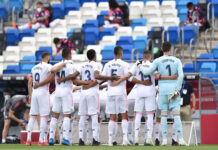