At any point in the season, nobody anticipated West Ham United as a contender to break into the top four. After leapfrogging Chelsea into the fourth spot on the table and in fantastic form the Hammers are serious contenders to qualify for the Champions League or either of the Europa League competitions. This will be their tough test and will be hoping to show their application against league leaders Manchester City.

The Hammers escaped relegation last time and now are serious contenders for European football with a remarkable turn-around. Only Leicester City winning the league in 2016 would top this accomplishment if West Ham finishes in the top four. The criteria are based on shock value, not the best overall season in the Premier League. Michail Antonio quietly had an outstanding season last season, and this season it depicts it’s no fluke.

Acquiring Jesse Lingard from Manchester United has been a big boost to the team. Lingard did not get much playing time with the Red Devils this season and has shown an impact on his new team. He scored three goals in four games for the Irons this season.  He has the vital experience of always contending for the top four and European football during his tenure at Manchester United. Lingard can prove leadership to his teammates who have not been this high on the table in their careers. Finishing the season strong will determine how the West Ham season unfolds. Lukasz Fabianski is an underrated goalkeeper in the Premier League. He will need to replicate his performance in his last fixture against City which resulted in a 1-1 draw.

Speculation about Sergio Aguero‘s future at the club will largely come down to how he plays this season. Pep Guardiola needs to start him in a significant number of games to assess his worth to the team. Arguably the best goalscorer in the club’s history will be hoping to keep the good times rolling. City is back to full strength as Kevin De Bruyne returned in the win over Arsenal on the weekend.

Ilkay Gundogan and Ruben Dias have been Manchester City’s best players this season. Gundogan proved to be the spark the side needed as he stepped up with an explosion of goals in De Bruyne’s absence. Meanwhile, Dias has installed confidence in his teammates notably his partnerships with John Stones and Oleksandr Zinchenko. This defence is so good that there is rotation among the centre-backs. Aymeric Laporte finally has a centre back to take the pressure off him. The only time this team seems to concede a goal is because of a penalty or a player being out of position which leads to a goal.

The game plan for City will include how to contain Tomas Soucek and Michail Antonio, the leading goal scorers for West Ham. Manchester City will be hoping to not concede from set-pieces with the Hammers’ duo a big threat from them.

Guardiola’s rotation may come down to how much they are tested in their Champions League game against Borussia Monchengladbach. City will likely need to score more than a goal to win this game. They need to find that killer mentality and not always hope the defence doesn’t slip. It’s a dangerous game against elite competition.

It will be a hard-fought contest but City will prove to have too much quality. They are currently on another level to any team in the world right now and are showing signs of establishing the bullish form they have shown in past weeks. However, if the Hammers can play anything as they did offensively against Arsenal, a draw would be a great result for David Moyes’ side. 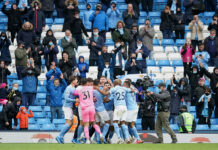 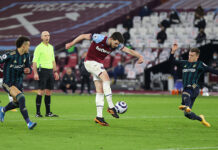