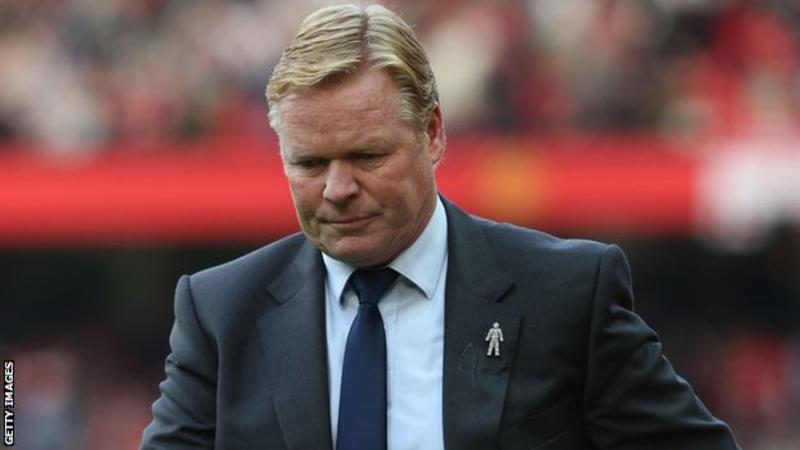 Ronald Koeman has been sacked as Everton manager, just nine games into the new season.

His side crashed 2-5 to Arsenal at Goodison Park yesterday, the seventh loss in eleven games. When the few remaining fans at the end expressed their  displeasure, it was the last straw for the Everton board.

The fans were given hope in the first part of the match, with Wayne Rooney curling in an early goal, but then normal services resumed. The Toffees no less than crumbled, allowing an Arsenal onslaught that spelled the end for Ronald Koeman.

Ronald Koeman told Sky Sport following the match “I still believe I can change the situation. “

He wasn’t to be given the chance. An official statement from Everton said: “The club would like to express their gratitude to Ronald for the service given to the club over the past 16 months.”

It was only three weeks ago, following a home defeat by Burnley that owner Farhad Moshiri, speaking for the club insisted that “Koeman retained his total support” in a report by the Guardian.

Since then however, a series of disastrous results, which started with their opening day home thrashing to Spurs, left a club that has spent almost £140M this summer, just three points above the relegation zone.

They also only have a slim chance of progress from Europa League Group E after losing to Lyon and Atlanta and a draw with Apollon Limassol. Cancelling out last years efforts to qualify.

Former Everton defender Michael Ball played under Koeman at PSV Eindhoven. He told BBC Sport it was his man-management that was problematic. “When results go bad he doesn’t seem to know how to lift and improve players.” He stated.

He went on “He struggles with his mannerisms. You never get a pat on the back. Some players rise to that treatment and others, rightly or wrongly, can’t deal with it. “

The Toffees have struggled without Romelu Lukaku. Club and fans hoped to continue the success that left them 7th spot last season, and the huge investment mean a good start. It hasn’t worked out that way, Koeman will no longer be able to try.

Everton are not known for replacing managers. Koeman won 40 percent of all matches. One less than David Moyes. The Everton board it seems want more for such huge investment. Ronald Koeman isn’t it.

On social media suggests that fans want Wayne Rooney as manager, who started his career at Everton, and has recently returned.