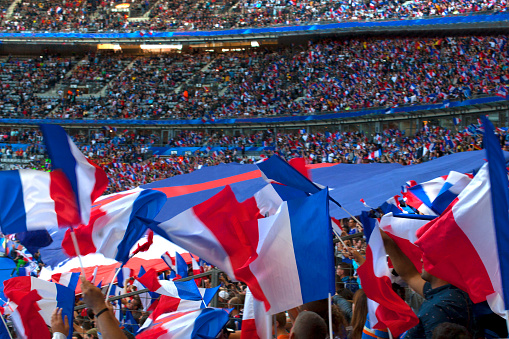 The French national team has a long and storied history, with many triumphs with the latest conquest being the UEFA Nations League. Les Bleus were able to defeat Spain 2 – 1 and secure the title. Leading into the semi final of this tournament against Belgium, the star-studded national team was being questioned by many pundits after numerous subpar performances in different competitions. The Nations league served as a reminder as to why France are World Cup favorites for Qatar next year.

Why France Are World Cup Favourites For Qatar In 2022

France were able to dispatch two of the top ten teams globally on the way to the Nations league crown. First, Belgium were taken down in the semifinal by way of an outstanding second-half comeback. Les Bleus trailed the top-ranked team in the world 2-0 at the interval and the game and their Nations League aspirations looked to be done and dusted. Less than 20 minutes into the half, Karim Benzema cut the deficit in half. Then, after giving away a penalty, Kylian Mbappe slotted home to equal the score. In the game’s dying embers, Lucas Hernandez would cap off comeback with a great goal to secure the win.

More than the win itself, what this game proved was the resilience this French team has. No one would have given them a chance down two goals to the top-ranked side in the world. The talent showed up, though, played to their potential, and showed why they won the World Cup three years ago. The comeback preceded the Final, which was a 2-1 victory over Spain. The contest was tight throughout and deadlocked zero all at the break. Spain would strike first blood, about 20 minutes into the half. Next, in a seeming carbon copy of the semifinal, Karim Benzema popped up and stroked the ball home to tie it up at 1. The game-winning goal was scored by none other than Kylian Mbappe; the PSG superstar slotted home the goal that would end up as the winner. For the second straight game, France came from behind in the second half against high-level competition and got the job done. The World champions can beat you in multiple ways, whether from in front or behind. It does not get much more impressive than beating Belgium and Spain in the span of 4 days. The ability to beat elite competition is why France are FIFA World Cup favorites next year.

A Perfect Mix of Experience and Youth

Only eight players were part of the World Cup-winning team that Didier Deschamps selected. More than half the team had minimal experience at international level. This list included highly sought-after younger players Aurelien Tchouameni and Jules Kounde although it was the old guard that got France back into each game with the prolific Real Madrid man Karim Benzema leveling both games. There are also players like Kylian Mbappe and Dayot Upamecano who have plenty of international experience but are still only in their early twenties. The perfect mix is in the balance with veterans like Benzema, Hugo Lloris, Paul Pogba, Antoine Griezmann, and Raphael Varane. The balance of youth and veterans for France is as good as it gets. The young players always have a leader or respected voice to help when things don’t go well. Throw in the manager, Didier Deschamps, who has won a World Cup as both a player and manager and the ingredients are there for further success. The recent Nations League roster also does not include European stars N’golo Kante, Ousmane Dembele, Kingsley Coman, and Marcus Thuram, to name a few. The roster is the perfect and precise balance of veterans and youth to achieve their lofty goals. This mix is one reason why France are FIFA World Cup favorites ahead of next year.

This seems to state the obvious, but Les Bleus have arguably the most talented group of players to choose from on the planet. There is an embarrassment of riches in every area of the pitch. You need strong goalkeepers and they have that with world-class Tottenham Hotspur keeper Hugo Lloris and AC Milan keeper Mike Maignan. If you need defenders, how about Benjamin Pavard, Raphael Varane, Dayot Upamecano, Lucas Hernandez, and Jules Kounde. The midfield is littered with global star players like Paul Pogba, N’golo Kante, Thomas Lemar, and Aurelien Tchouamani. Up front, deadly goal scorers include Antoine Griezmann, Karim Benzema, Kylian Mbappe, Olivier Giroud, Kingsley Coman, and Marcus Thuram. This stellar list of superstars could be 20 to 25 players longer with what France has to work with.

The World Champions go into most games with the talent advantage in every part of the pitch. France were the best team in Russia three years ago and with the recent Nations League success. The National team is two or three deep is every position, with players plying their trade at elite European clubs.

Seeing top-level competition at club level can only make this team better because of how battle-tested every player gets to this international stage. Les Bleus had recently had their superior talent on full display, and expect this to continue up to and including Qatar in 2022.