Neymar Jr is a global superstar that needs no introduction but continues to take Brazil to the next level. The Brazilian genius plays a peculiar kind of football; one characterized by flair, elegance and aplomb. The 28-year old has always been a consistent performer, even when results doesn’t go his team’s way.

Neymar produced 15 goals and seven assists in Ligue 1 and the Champions League this season for Paris Saint-Germain. These numbers appears meagre for a player of his abilities. But some of the statistics that surroundsnds him are close to perfection.

The magnitude of these statistics comes from the fact that Neymar produced these numbers better than at least 97% of the attacking midfielders/ wingers he played against. What’s even more impressive is that the Brazilian was sidelined for 95 days, missing a total of 19 games for PSG.

Neymar has been instrumental in Brazil’s Copa America dominance so far. The Selecao sits atop Group B with two wins in as many games. The PSG star already has two goals and an assist to his name. You could bet that he is going to increase his tally as the competition carries on.

Neymar Closes in on Pele’s Record

Neymar scored his 68th Brazil goal on Friday placing him second behind Pele’s 77. This was another game that saw the Brazilian do what he does best. Towards the end of the match, he reached up his sleeve and pulled out every trick in the book as he kept the ball away from three Peruvians before being fouled. It was absolutely delightful to watch.

Since his move to Paris Saint-Germain in 2017, his game time has been somewhat limited as a result of the injuries he has suffered. A situation which has diminished his value in the eyes of many. He has also faced intense criticisms for being overly egotistic. All of these has not hindered the joy the Brazilian exudes when he plays .

There aren’t too many players like Neymar these days, who wants to entertain fans with their skills. With the ball at his feet, the Brazilian genius is capable of producing the rarest of magic.

Even though he is now considered an injury prone player. He consistently produces numbers better than many players out there. He might not feature much in quantity, but he does stands out in quality. Despite his troubles on and off the pitch, Neymar Jr continues to be a spectacular Footballer. 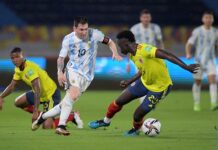