That’s the only question that matters under Mikel Arteta. With Arsenal’s new playing style a player’s worth is deeply tied into what he brings to the overall system. So, how does Partey fit into our playing style? What does he bring to the table? What does he take away? To answer these questions I’ll be framing Partey against two players to determine his worth to the system. First, what is on hand right now in value in Lucas Torreira, second to the ideal modern CDM in this system, Fernandinho.

Can Partey Pass With Us?

Before anything, this is a pass-move-pass team so it’s essential to see how Partey holds up as a passer. Partey has an average completion percentage of 82.4% which is great but still below the Arsenal midfield average of 86.92%. To get the clearer picture we need to go further into the numbers. 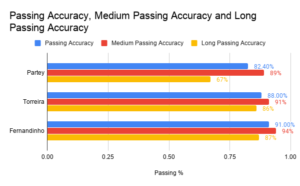 Partey is holding up well in the medium passing game but his long passing ability is severely lacking which could be cause for great concern in this system. Watching City it becomes clear creativity happens on the wings, and due to this one wing may become overloaded. This is where Fernandinho steps up as the pivot and switches play to the other wing about 10 times a game, in doing this the defense panics to cover the free attackers and creates space for attackers to run into. This helps spread the players out so City can dissect them. It’s a vital role our 8 won’t be able to play as they’ll be lurking outside the box like KDB and it’s dangerous to play off him so close to the defenders. Partey should step up and perform this role but if his long ball is lacking in the slower-paced La Liga what will happen when he steps into the quicker Premier League?

Can Partey Press With Us?

It’s a bit unfair to judge Partey on his offensive game when his calling card is his defensive ability. So let’s frame his pressing numbers against the ideal. For more context and a more complete picture, I’ve added last season’s numbers as well.

It’s clear to see Partey is superior to what’s on hand right now when it comes to pressures and if provided with the chance to be more efficient with fewer opportunities he may even put Fernandinho numbers to shame. So, yes Partey can press with us.

Partey as a Play Breaker

This is where we examine Partey’s ability to break up play as an individual. The reason this is coming after the last two is that, in the system, Partey will almost never be asked to break down play alone, our press should handle that. Still, it’s worth seeing him in this light against what’s on hand and the ideal to see how he stacks up if ever called upon. 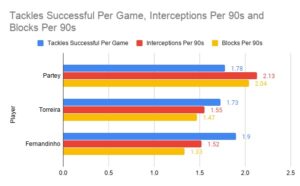 These numbers clearly show Partey is one of the best at breaking up play, which is part of what makes him so valuable.

He placed top 10 on the overall La Liga charts with these numbers, ahead of Barcelona stars Sergio Busquets and Arthur Melo.

His counterparts further highlight his eliteness.

As a box-to-box player Partey is easily one of the most elite playing his position.

If Arsenal are going to spend 50 million on anyone it better be an elite level center half. Partey has not separated himself enough in the numbers for me to say he is a must buy. We would be going from good to very good if we bought Partey, it’s a simple conclusion that what we have on hand isn’t terrible enough for us to spend such a lavish sum on a player that isn’t particularly moving the needle. With all this said I still want him,  just not as a first option. If the money is available after procuring an elite-level centre back then I’m all for it, prioritizing bringing in a very good CDM when we have a good one on hand already just doesn’t sit right with me.