Liverpool host an in-form Manchester United side hoping to set their title aspirations with a win over bitter rivals Liverpool, in their own backyard.

Their attempts to retain their Premier League title is going through tormentous times. The current league and European champions have not won a league game since crushing Crystal Palace on December the 19th of 2020.

Ever since, the Reds have dropped points against West Brom, Newcastle and Southampton. Bitter rivals, Manchester United, on the other hand, have been on an impeccable run. They have not lost in the Premier League since losing to Arsenal in November. On January the 17th, both sides will clash in a new edition of England’s biggest derby and this time with a title pursuit on the line.

Recent Form Record Goes Out the Window in Rivalry Games

Manchester United has not seen their brighter days since Ole Gunnar Solskjaer took over the management of the first team. Repeated failures in European competitions and mediocrity in the League, has put Solskjaer’s job in jeopardy. The most recent disappointment features the Red Devils’ relegation to Europa League.

It seemed the Norwegian manager’s time at Old Trafford was coming to an end, but the unexpected occurred. United pulled off a great winning streak and after beating Burnley at Turf Moor now sit atop the Premier League standings. However, the team still needs to produce when facing top sides.

Liverpool, on the other hand, is facing a crisis. Injuries piled up this season and are costing them points, repeatedly. The Reds front three have had a recent drop in form and new signing Diogo Jota unavailability is another huge concern.

Mohamed Salah has opened the door to transfer rumours that do not help calm the locker room. Moreover, Liverpool can not rely on their super-sub, Divock Origi who has been in a poor form lately. The Reds’ attempt at building a dynasty now faces their biggest obstacle; Sunday at Anfield will be so much more than just a derby match for both clubs.

Liverpool has not reached their peak performances lately this season, however, Jürgen Klopp’s side knows how to plan for big matches and always bring their A-game to the pitch.

Evidence of it is found on this season’s clashes against the top sides. Wins against Chelsea and Tottenham along with draws against Manchester City and Everton. The Anfield club tends to take control of the game possession and besiege their opponents against their own goal. It does not take long until own of their many star players manages to get the ball in the net. However, this Sunday the Reds will face Spanish goalkeeper, David De Gea, who has some remarkable performances and saves against Liverpool.

Manchester United is quite a peculiar team, although, sitting at the top they do not have a specific playstyle and more often than not win because of their individually talented players. When visiting Anfield, Man United tend to overprotect their goal and not create much pressure on their opponents. Therefore, De Gea is usually their top player in their visits to Liverpool.

All in all, we can expect a thrilling matchup between two fierce rivals who will not only be motivated to beat their arch-nemesis but to clear their path to another league championship.

Sunday’s epic clash between Liverpool and Manchester United will feature many football stars and players capable of performing at the biggest stage. The home side’s lineup includes their lethal front-three (Sadio Mane, Roberto Firmino and Mohamed Salah), a stacked midfield with the likes of Georginio Wijnaldum and Thiago Alcantara.

The defence is the main concern, Fabinho established himself as a great replacement to Virgil Van Dijk. In recent times Jordan Henderson and Rhys Williams dispute the other vacant centre-back spot. At the wings, Andrew Robertson and Trent Alexander-Arnold to assist in both sides of the pitch. At goal, the Brazilian netminder, Alisson Becker.

Manchester United will also prepare their top lineup available for the weekend’s game. David De Gea is certain to start in goal, whilst Aaron Wan-Bissaka, Harry Maguire and Eric Bailly will be most likely to take their places in defence with Luke Shaw set to beat out Alex Telles for the task to mark Salah.

The midfield is likely to feature the same team from midweek’s clash with Burnley with Paul Pogba and Nemanja Matic, sitting behind the majestic Bruno Fernandes.

Anthony Martial is set to face a late fitness test after limping off with a hamstring injury on Tuesday night. Uruguayan striker Edinson Cavani is set to lead the line after impressing during his brief start to his time in Manchester with Marcus Rashford set to keep his place.

If the French forward is unable to make the crucial match, the likes of Mason Greenwood could be set to deputies. Donny van de Beek is set to take his place on the United bench as he waits for his long chance.

Liverpool v Manchester United A Derby Like No Other

Both clubs’ fans take great pride on some of their biggest names and this game could give supporters valid arguments to believe their players are better.

Wan-Bissaka vs Alexander Arnold: Probably the biggest discussions lately between fans of both sides are on whose right-back is better. Wan Bissaka is said to be better in the defensive side but covering Sadio Mane and Robertson will be a hard task for the Red Devils’ full-back. Liverpool’s Alexander-Arnold has his defensive frailties and was subbed off in the defeat to Southampton for losing possession for a remarkable 38 times.

Bruno Fernandes vs Thiago Alcantara: This matchup will be of great interest and importance to the game’s outcome. Whoever stands taller will be able to grant their team much needed control over the midfield and provide their attacks with more space to play through. Both midfielders receive great praise from the media and are recognized as top-class.

Alisson vs De Gea: The ultimate test will come down to both plyers sitting in goal. Who is going to be able to pull off the better save to keep their team’s title hopes alive? Both keepers will face great competition and high scoring offences. The last matchup between these teams featured Alisson marvellous assist to Salah who put the final nail in the coffin and sparked Liverpool to continue their great campaign. However, De Gea knows a thing or two on making breath-taking saves at Anfield.

Any game between Liverpool and Manchester United is appealing and gathers people all around the globe to watch it. This time it has an even bigger addition. A season-defining game, in which the winner will be granted a great morale boost and a glimpse at the Premier League trophy. This Sunday, an early final will take place at Anfield, be sure to not miss out on it. 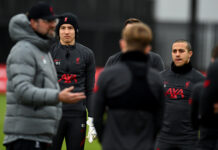