In under a week’s time, the Premier League will return to our screens in one of the most highly anticipated seasons in recent history.

Liverpool ran away with the title last season, finishing 18 points ahead of second-placed Manchester City, and ended their 30-year wait for the Premier League.

Now, with Leeds United arrival back in the top-flight and clubs strengthening their starting eleven, the upcoming campaign could be one of the most fascinating and thrilling seasons in history.

Manchester City is the only club in the past decade to successfully defended their title, as Liverpool aim for a second consecutive Premier League title. However, the past few months must have been frustrating as a Liverpool supporter to see their rivals heavily strengthen, whilst Klopp continues into a new season with the exact same starting eleven. The Premier League champions still need a back-up for their front three attackers, and with the departure of Gini Wijnaldum to Barcelona looking likely, then another midfielder – preferably two. Leaving Liverpool very short in-depth with the number of games in the coming months.

Manchester City has unsurprisingly splashed the cash once again this summer, bringing in Nathan Ake to fix their defensive worries after failing to replace the imminent departure of Vincent Kompany last season. Pep Guardiola is still heavily linked with a move to Napoli’s Kalidou Koulibaly, who makes City’s back-line unbreakable and turns them from contenders into champions.

Enormous amount of pressure will be on the shoulders of Frank Lampard after spending close to £200m on new players. The recruitment of Timo Werner, Kai Havertz, and Hakim Ziyech can instantly make them title contenders, alongside the defensive reinforcements of Thiago Silva and Ben Chilwell. But these number of new players need time to gel, which could hamper their bid for Premier League.

Manchester United have been disappointing in the transfer window so far, only signing Donny Van De Beek but not strengthening in defence or adding another quality attacker. Even if United manage to secure Jadon Sancho, their squad is still not capable of challenging the likes of Chelsea, Liverpool and City, whilst an injury to Bruno Fernandes could majorly disrupt their season. Spurs and Arsenal underachieved last season, finishing 6th and 8th respectively. Both sides have been active in the market, improving on essential positions, but haven’t convinced me that they can challenge the top four – let alone the title.

Can Leeds United finish in Europe?

After spending 16 years out of the Premier League, Marcelo Bisela delivered Leeds United back to promise land.

His recruitment definitely signals his intent to secure survival in the Premier League. But to also push for a top-10 finish – or even a European place. The signing of Valencia’s Rodrigo, who scored 38 goals in 172 La Liga appearances, and German international Robin Koch are usually made by mid-table sides – not newly-promoted sides. Highly-touted attacker, Rodrigo De Paul, is reportedly close to signing for Bielsa, who has been linked with Spurs in past windows.

Based on these signings and current players at his disposal, a top-half finish looks gainable. Overall, it will be enjoyable to see Leeds United fighting among Premier League’s best once again.

Who will underachieve this season?

After their high-flying start and was looking to mount a considerable charge for their second Premier League title in five years, Leicester City fell away and eventually missed out on Champions League qualification. It wasn’t all doom and gloom as the Foxes still finished 5th – highest position since winning the Premier League back in 2015.

However, Leicester City’s disappointing end to the 2019/20 season could carry onto the upcoming campaign due to lack of transfer activity. Brendan Rodgers’ has only signed Atalanta’s Timothy Castange, but to replace one of their key performers last season, Ben Chilwell, who made a £50m move to Chelsea. Obviously, the transfer window doesn’t close until October 4, giving Leicester plenty of time to sign players but just looking at their squad, Rodgers’ needs; a striker, a winger, a midfielder and a centre-back in the space of a few weeks.

Unfortunately, I don’t expect Leicester City to be in or around the Champions League place, but fighting among 7th place, alongside Everton, Wolves, and Leeds.

Aston Villa just avoided relegation last season after a terrific result against Arsenal, but, once again, the lack of transfers is worrying, especially for a club like Villa who struggled throughout 2019/20 season. The lack of goals was a significant problem for Dean Smith’s side as Jack Grealish, a midfielder, was their top scorer with only eight goals, as the highest goals scored by a striker was five in 21 appearances. Yet Aston Villa doesn’t look close to bringing in a recognised number 9, missing out on Callum Wilson to Newcastle United.

West Brom Albion and Fulham both return to the Premier League and hoping to build on their success from last season to achieve safety in the Premier League this season. With highly experienced Premier League manager at the helm, West Brom looks a different prospect after spending two years in the Championship and have managed to keep hold of two key players – Grady Diangana and Matheus Pereira. However, the Baggies definitely need to add further quality in their squad to have any chance of surviving in the Premier League.

Unlike West Brom, Fulham has a fairly in-experienced manager as his promotion-winning campaign was Scott Parker’s first full season in management. He will now be tasked with one of the toughest challenges in English football – surviving in the Premier League. By looking at the teams around them and players signed, Fulham is in for a mammoth task once again this season. 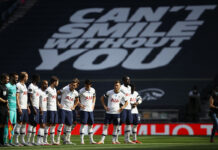 How Spurs could line-up next season

Why have Barcelona decided to let go of Luis Suárez?

Adarsh - September 23, 2020
0
The Nou Camp, home to the one of world's biggest football institutions in the world, has hit a rough patch as of late. The...

Anthony Ziola - September 21, 2020
0
In the best game of week 2 of the Premier League Wolves hosts Manchester City on Monday night. It will be Manchester City’s first...

Are Sergio Reguilon and Alex Telles any better than Shaw?

Adarsh - September 15, 2020
0
Are Sergio Reguilon and Alex Telles any better than Shaw?.....Reguilon or Telles could very well add a bit of flair in that position....

Annirudh - September 11, 2020
0
The 19/20 European Football season was not one to forget. Here's a look back at a masive season before we embark on the next.
© Copyright Last Word On Sports INC, 2011
MORE STORIES

Why have Barcelona decided to let go of Luis Suárez?

Are Sergio Reguilon and Alex Telles any better than Shaw?