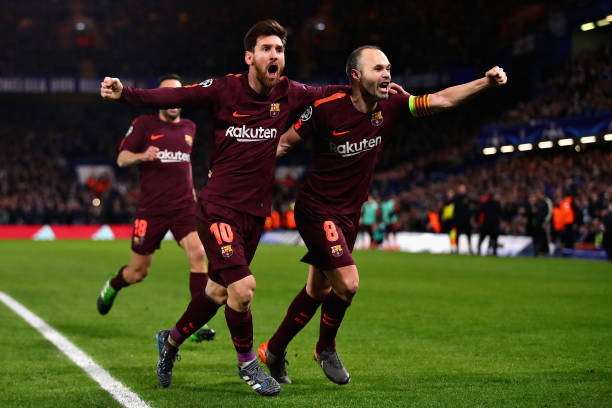 Chelsea and Barca will go into their second leg clash with it all to play for as they drew 1-1 at Stamford Bridge.

The Blues took the lead midway through the second half as a well-placed Willian shot from the edge of the box snuck through the Barcelona defence.

Chelsea looked to be in control of the match, but a good move from Barca combined with a lack of concentration in the Chelsea defence allowed Lionel Messi to level the scores.

While both teams had chances to wrap the game up, the game ended one apiece. They now have a three-week wait before meeting again at Camp Nou for the second leg.

Chelsea would certainly feel the more aggravated of the two sides. Not only were they leading, but they had far more chances at goal in the first half, but failed to capitalise on any of them.

Despite that, they can certainly be encouraged at the way they played. The Blues dominated the opening ten minutes of the match before sitting back to Barca’s famous attacking style. However, this seemed to be a tactic that suited them as they increased their tempo and generally had the better of the game.

One part of their play they certainly will not be pleased with is their defending. The Chelsea backline allowed a misplaced Andreas Christiansen pass to fall to Andres Iniesta, who then squared to Messi to score. The Blues will certainly need to improve their concentration ahead of the second leg at the Nou Camp.

Overall, however, Chelsea can be pleased with their performance, and should still hold out hope of progressing to the quarterfinals. They will certainly be at a disadvantage, but it would still be foolish to write them off you feel.

While Barcelona predictably dominated possession for almost the entire match, it was an unusually sluggish performance on their behalf. They found themselves reduced to only a few half chances in the first half and drove most of their set pieces straight at Chelsea keeper Thibaut Courtois.

It will come as no surprise to hear that Lionel Messi was the one to rescue them from their peril. Barca’s long-serving talisman provided a typically sumptuous piece of skill before scoring that crucial away goal for the La Liga leaders.

One player who will certainly not be getting praise from the Chelsea fans tonight is Luis Suarez. Memories of his bite on Branislav Ivanovic for Liverpool back in 2013 will no doubt be fresh in their minds. The Uruguayan striker received a harsh reception after having a penalty claim turned down right before Barca’s equaliser, so much so that it caused him to retaliate in response to his team’s goal, though it doesn’t seem to have been as an expletive as in times past.

Nevertheless, Barcelona got the job done, with the much sort after away goal as well. However, they will most likely go into the second leg as slight favourites, they will have to significantly improve on tonight’s performance if they are to advance. On the other hand, you also feel that, despite Chelsea’s resistance, they will prove a much more formidable opponent on their own ground.