Rossoneri bench boss, Vincenzo Montella held yet another meeting with the club’s directors. The search for a new fitness coach continues.

The manager took to Twitter last week to announce the departure of Emanuele Marra. He ended their relationship which began back when the duo worked at Fiorentina.

Bounce back, AC Milan. I have thought long on how to step up. Let's start with physical preparation. pic.twitter.com/VVvQvys9Oi

MilanNews.it reports the decision was taken by Montella and not the club, even though he has been working with Marra since his days at Fiorentina. “He wasn’t the problem, but disagreements can happen. He is like a brother to me. It was a very difficult decision for me, and I have made it also to protect the rest of my brothers of the staff. He knows how much I respect him, it’s just that we were not on the same page anymore. These things can happen. I wish him good luck”.

As a result Montella – who met with directors on Monday to discuss the weekend defeat to Roma – was once again at Casa Milan, with Sky Sport Italia reporting Daniele Tognaccini could take the position of fitness coach.

On his choice for a new fitness coach: “I am waiting for my candidate to reply. Let’s see if he agrees to come. When you want to start something new, you need to make important changes, from a mental standpoint, we need something else”.

The coach in question, has already worked as manager of Milan Lab and would be an internal option, while Massimo Neri is also another name under consideration.

It’s unclear when a new fitness coach will be announced, though a decision may not be imminent. If it is Neri, he is currently under contract to both Guangzhou and the Chinese national team. Neri and Milan would have to negotiate a release from his current contract. 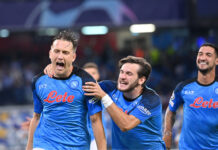