A day removed from what was a tumultuous weekend for Manchester United, the Red Devils came up with the signings of the 33-year old PSG legend Edinson Cavani, the 27-year old Alex Telles from FC Porto, 18- year old Ivorian prodigy Amad Traore from Atalanta, and Facundo Pellistri from Peñarol. How can Manchester United lineup with their new signings? Let’s find out.

How Manchester United can lineup with Telles, Cavani, Traore, and Pellistri?

Currently, The Red Devils’ lineup in a 4-2-3-1 formation with a back four consisting of Luke Shaw, Harry Maguire, Victor Lindelof/ Eric Bailly, and Aaron Wan-Bissaka. The midfield usually houses the partnership of Paul Pogba and Nemanja Matic, with Bruno Fernandes playing as the No.10, just behind the Frenchman Anthony Martial. Marcus Rashford and Mason Greenwood occupy the flanks.

Anthony Martial or Edinson Cavani or both?

The 23-year old former Monaco man finally started to live up to his mammoth potential by scoring an unprecedented 23 goals in a season, but the start to the 20/21 season has been rather forgettable. The signing of the all-time leading top scorer of PSG could put Martial in the backseat, or there is a possibility of both playing together if Rashford’s spot in the starting eleven is compromised.

Telles or Shaw or both?

The signing of Alex Telles is an upgrade over Luke Shaw who hasn’t been able to hit the ground running due to various injuries that have hampered his progression. The signing of Telles is very advantageous for the club due to his attacking prowess. The Brazilan full-back directly contributed to 13 goals and 12 assists last season. His attacking prowess puts him under the category of “modern full-backs”, something which is on huge demand these days. On the contrary, The Englishman is far more balanced as a player as he can do a bit of both, attacking and defending but this necessarily doesn’t put him over the highly-rated full-back who has arguably been Porto’s best player for years now. To know more about why Telles is an upgrade over Shaw, click here.

Amad Traore joined Manchester United’s list of signings to everyone’s surprise. A fee of around 30 million-plus add-ons for an 18-year old with under 25 minutes of first-team football is a massive gamble, but the Ivorian has won comparisons to some of the greatest footballers ever and could potentially carve a legacy that will be remembered for years to come.

The youngster impressed the Atalanta chiefs enough to play for the first-team. Due to the currently stacked front line at Atalanta, and the possible need for experience is what resulted in the club attempting to send him out on loan to Parma. The deal with Parma ultimately fell through due to the bid made by Manchester United. It’s uncertain as to whether if he is going to be a first-team player or the academy’s latest addition. But given the price and the situation, it’s likely he could join the first-team.

Facundo Pellistri “The other Uruguayan” –

The deadline day marked the signing of another Uruguayan but a relatively unknown figure from Peñarol in Uruguay. The 18-year old has already received plaudits from the former Manchester United striker Diego Forlan for his incredible talent. The player possesses incredible dribbling abilities and is touted to get better as time goes on. The youngster is already being linked to the Manchester club’s first-team plans. That’s a testament to how good he is.

The game on Sunday against Spurs told brought back an almost decade-old center-back problem. The ultimate scoreline was a testament to the number of changes that should be made, both on the pitch and behind the scenes.

The return of Axel Tuanzebe could provide an option and the rise of Teden Mengi from the academy could potentially help the 13-time premier league winners as they look to bounce back.

Here’s how Manchester United could lineup this season – 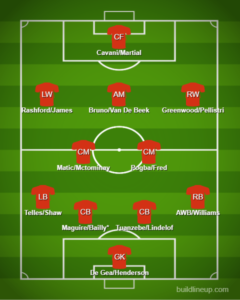 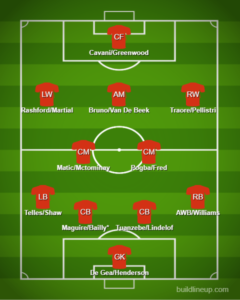 *It’s presumed Amad Traore will play for the first team once he arrives in January.

*From January, Daniel James could play back-up to either any of the left-wingers or the right-wingers.

* There is no certainty of Eric Bailly operating as an LCB, but he’s most likely to occupy the position after Maguire.

Note- Teden Mengi and Odion Ighalo have not been added to the formations due to the limited number of appearances they could make, and Ighalo’s contract is set to expire in January and is not expected to be renewed.