Despite the troubling likelihood of relegation for 20th placed SD Huesca,  left-back Javi Galán continues to be the brightest spark of their season and interest in the left-back is high.

His incredible consistency and contribution in both defence and attack are impressive and it would be a shame to see him return to the second division of Spain.

Despite the 26-year-old Spaniard going slightly under the radar, he’s arguably been one of the best fullbacks in La Liga this campaign. Not only does he have a great skill set for his position, but he’s also been able to perform well against some of the better teams in the league.

To fully understand what he brings to his side, here’s an overview of Javi Galán’s major strengths and weaknesses.

For a defender to average 3.5 dribbles per 90 minutes and be in 2nd behind only Lionel Messi for total successful dribbles this season (92) is a serious statement in itself. His quality on the ball is his most standout attribute, allowing him to get into dangerous areas to progress his team’s attack.

His dribbles usually come from runs deep within his own half, rounding defenders with close control and speed. Because of his quickness in possession, it looks so easy for him to skip past the opponent’s press from such a deep position. His 78% dribble success rate in doing so demonstrates that he’s more than capable of breaking that first line of pressure.

With 6.24 progressive carries and 1.71 carries into the final third per 90, Galán has shown to be one of the better forward-playing defenders in La Liga. Even when playing for a team that is often restricted offensively, he’s still managed to create chances for himself and support the attack.

Javi Galán’s crossing ability plays a key part in his team’s chance creation. With 1.1 key passes and 0.84 accurate crosses into the box per 90, he displays both variety and accuracy in his deliveries.

When Galán plays the ball into the penalty area, he’s usually situated in a zone that’s deeper than usual. He’s good at sending passes from those kinds of areas by using lots of whip and height. When coming off the dribble, the Spaniard likes to get in behind and play sharp low crosses into the box. His passes are often accurate, setting up his forwards consistently with scoring chances.

Anticipating Galán’s decisions when crossing can be tricky for defenders because he’s so unpredictable in doing so. With the quality of his passes, the 26-year-old has an effective weapon to use when going forward.

Galán is incredibly quick and energetic, which plays a big role in the way he plays behind the ball. He’s first in the league for tackles won (61) and 3rd in total successful pressures (157), which is due in part to Huesca being behind the ball quite a bit.

However, because of his constant pressure on the man in possession, he becomes an incredibly effective barrier against opposition wingers. He’s good at getting tight to the player, using his speed to change direction and keep up with the attacker.

Although Huesca has benefitted from his presence at fullback, his intensity tends to bite back at times. Because his pressing is so aggressive, he’s committed more fouls than any other defender in Spain this season (52). This can also be a downside as he tends to overcommit often, pulling him out of position and leaving holes in the back.

Galán has proven himself to be a great player in possession and a capable crosser. However, there are questions about the different ways in which he can contribute to his team in an attacking sense.

When analyzing his matches, the fullback’s link-up play is pretty straightforward. If the option to either cross or carry the ball forward isn’t available, he can become passive and ineffective. This is evident in the number of progressive passes he plays per game, which is only 3.34. It’s important to remember also that SD Huesca’s lack of attacking threat can affect this stat.

Because he sometimes lacks variety in his contribution, he can be an easy player for the opposition to target. Although it’s very difficult to stop him on the ball, his predictability is one of his biggest flaws.

Javi Galán is a great combination of technique, speed, and work rate. His comfort and quality on the ball make it difficult for the opponent to contain his presence. His crossing is effective and accurate, while his defensive contribution is relentless and he never seems to tire.

The player is in his prime, so interest is high in Javi Galán who could be available for a cut price.  Sevilla, Real Betis, and Barcelona have come up in rumours over Galán recently, so it’ll be interesting to see who comes calling once the summer window rolls along. If one thing’s for certain, the Spaniard has the qualities to grow into one of the most reliable left-backs in La Liga. 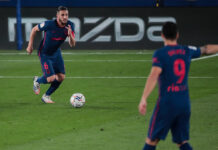 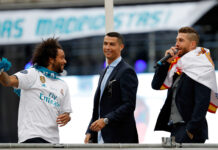