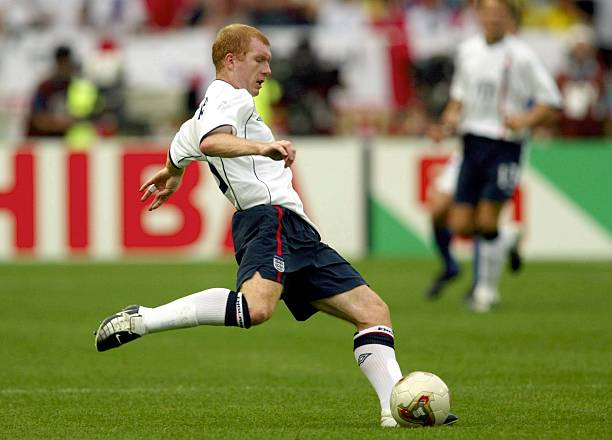 Whenever people talk about the golden generation of England footballers, people will always mention how Sven Goran Erikson treated Paul Scholes. Seen by many as our most gifted player in the generation, people talk about how Sven shifted him to the left and, in doing so, leading to his early retirement from international duty. But did Sven get it wrong shifting the Manchester United legend wide to accommodate Steven Gerrard and Frank Lampard?

Was Sven Wrong to Put Paul Scholes on the Left?

Sven Goran-Eriksson was seen by many as a foreign genius when he came to England, having won trophies in Portugal and Italy. Rescuing a doomed World Cup qualification and the 5-1 victories against Germany meant his stock was high going into the tournament in Japan and South Korea. However, following England’s flat displays at World Cup 2002 against Brazil and the lack of a Plan B, Sven became much maligned.

Many of Sven’s squad have criticised him for not building his team around Scholes, who would’ve been able to dictate the game. Players like Ferdinand, Gerrard and Lampard have all stated he didn’t try to find a system to accommodate them. It was at a time where England had the much-maligned left-sided problem where he tried numerous players to fill the role. He would not shift from 4-4-2 and was unwilling to leave out Lampard or Gerrard from central midfield to accommodate Scholes. Scholes’s early retirement meant England went without a player who could dictate the tempo and possibly led to the failure of the Golden Generation to make an imprint on the World Stage.

In England, we are very cynical about anything which may be different from the normal. Many people forget Sven did try and play a ‘diamond’ formation in many Euro qualifiers to try and accommodate Gerrard, Lampard, Beckham and Scholes. The idea was Scholes would be at the top of the diamond with players being able to interchange. At the time, it was ridiculed as a system which lacked width, leading to the full backs being susceptible. The players complained after one or two games, asking Sven to change the system back to the normal 4-4-2.

Sven perhaps should have been stronger and tried to persist with the formation. However, he was put in a difficult position as the media, players and pundits were all slating his system. Fast forward two-three years down the line and everyone was praising AC Milan’s diamond formation under Carlo Ancelotti as he won two Champions League finals in three years.

Scholes Should Have Followed Zidane’s Example

Another common theme is the idea that Scholes was asked to play as a winger. This was not true, however. I feel Sven at the time was trying to get him to play from his starting position on the left, but letting him dictate the game and go central. France and Real Madrid used the position commonly to accommodate Zidane. With Lizarazu or Roberto Carlos behind him, they knew he could be free to dictate the game.

The other issue is that Scholes didn’t persist with international football to try and help England dominate. He retired at 29-years-old and did not allow Sven the chance to try to get the best out of him. Paul Scholes is a Premier League legend but people will always have a question about him at international level.