Real Madrid has dominated the previous meetings with Levante. In 21 matches, they have 16 wins, 2 draws, and 3 losses. The first fixture between both sides this season ended in a 1-1 draw at the Santiago Bernabeu on September 9, 2017. This ended a nine-match winning run for Real over Levante.

Levante had gone ahead through Alvarez after a long throw-in confused a disorderly Real defence. Lucas Vazquez, however, responded with his equalizer before the break which would have been the only goals in the fixture.

Gareth Bale, who started on the bench, came on to replace  Karim Benzema who was injured. The Welshman, however, missed several chances which would have earned his side the 3 points.

This time around Real Madrid will have both the Welshman and the French striker available. As well as they will have Cristiano Ronaldo to complete their classic BBC trio. Marcelo will also be available for selection. This highlighting the frantic finale in the last fixture. This saw him being sent off in the 89th minute for a senseless kick out at Jefferson Lerma when both players were on the ground. The dismissal came immediately after Levante’s goalkeeper Raul superbly denied the Brazilian from netting the winner.

Madrid got exactly what they needed last weekend as they rolled Valencia aside in an emphatic display away from home. Therefore, to think that Levante has a legitimate chance of holding them down after that display is a major folly to make. Ronaldo scored twice, from the spot, in that match. He looks to be kicking back into form in La Liga. Real Madrid demolished the last relegation contending side that they faced, so you just can’t fancy Levante in this one. Madrid could roll over them, sure, but it will not be nearly as big of a win as many would imagine.

Meanwhile, Levante will begin this round of fixtures in 11th place in the league. They have twenty-eight points. This puts them above the muck by a decent amount already, and are just five away from a European spot. They could push on further if they get a run put together. They have two wins in their last five matches and eight points in that stretch.

Real Madrid are in 4th place with 38 points coming into this one. They have a game in hand over all of the teams above them. So this could be the week they move into third place. They have won their last two matches now. At home, Levante are in woeful form. They have only 10 points from 11 home matches, including two wins and four draws.  They are not doing well recently, either. They have been winless  in their last five games and had gotten just one point from those games. Away from home, Real Madrid have earned two points a match through nine games. They are unbeaten in their last four. But they had drawn three straight games before their demolition job of Valencia last weekend.

Levante is expected to field a 4-2-3-1 formation. With goalkeeper Raul out injured, Oier is expected to start. The defenders Coke, Cabaco, Postigo and Luna are to be on field. The defensive midfielders Doukoure and Lerma are to compliment the attacking trio of Jason, Bardhi and Morales with their lone striker Ivi Lopez who scored at the Bernabeu in the previous fixture. 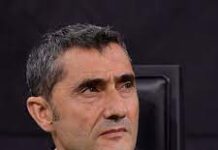