Manchester United’s midfield struggle once again reared it’s ugly head as they failed to wrap up the victory against Everton on Saturday 2nd October in the lunchtime kickoff and the fans were not at all happy having hoped to see an entertaining performance following the midweek Champions League late drama.

It was not long ago when the emotional return of Cristiano Ronaldo sent shockwaves among the whole footballing universe. The iconic number 7 shirt worn by Ronaldo charging down the wing once again made them hope of lifting some silverware this season. The goal was to challenge Manchester City, Liverpool, and Chelsea for the Premier League title. Apart from Cristiano Ronaldo Ole Gunnar Solksjaer bolstered his defense by bringing in arguably one of the most accomplished defenders in Raphael Varane as well as long time target Jadon Sancho. Sancho switched from Borussia Dortmund after the negotiations took place for more than a year. Lastly, the signing of Tom Heaton as a backup goalkeeper was also completed.

There are currently 6 midfielders in the Manchester United squad. Scott McTominay, Bruno Fernandes, Fred, Nemanja Matic, Paul Pogba, and Donny van de Beek. The main problem is that not one of these six can perform as a defensive midfielder and someone needs to protect the defence from becoming exposed. Even though United invested heavily to bolster their squad they managed to overlook the one position where they needed reinforcements.

Solskjaer mostly goes for the Scott Mctominay and Fred pivot in big matches to protect his backline. Paul Pogba cannot play as a defensive midfielder and he plays more on the left-wing rather than the midfield due to his defensive weaknesses. The French Midfielder has however done quite well in his advanced role registering 7 assists in 6 league games.  Nemanja Matic is the only one who can play as a defensive midfielder but age has caught up to him and he is often too slow to react and can’t spray the ball and keep up with the tempo of the game for more than 70 minutes.

Furthermore, Donny Van de Beek, who was brought in to create competition for the midfield last summer, has made few appearances and appears unlikely to make the team unless he does something to please the boss on the pitch. Despite this, Donny van de Beek was impressive against West Ham United in their Carabao Cup defeat.

Looking at the options for Manchester United’s rivals they have energetic defensive midfielders. They can play free-flowing offensive football and adapt a formation of 4-3-3. Two offensive midfielders can link up with the front three. The likes of Rodri, Fabinho, and Jorginho signify intent to play attacking football whereas in comparison to United’s gameplay, the go-to options are McTominay and Fred but they can only be effective against high-tempo oppositions such as Manchester City, Liverpool, and Chelsea whose attack comes in waves. Mctominay just returned from his groin injury and has been average but Fred has been poor since the start of the season. Opponents have bullied him, and his passing abilities decreased as he lost numerous passes and was unable to properly protect the defence.

The match against Everton, in which the Devils saw their lead canceled out by Andros Townsend led to a cloud of frustration hovering over of Old Trafford. Fred made two attempts to recover the ball but he failed to do so and is under strict scrutiny from the fans and pundits who believe that the Brazilian should have tried to stop his man from accelerating forward in the lead up to the equaliser. It could have avoided Everton’s goal and United would have gained three valuable points.

Oppositions teams target Fred as the weak link capitalising on his mistakes. Fred takes too many touches before playing the ball forward or sideways and Ole Gunnar Solksjaer needs to find a defensive midfielder who can become a protective wall for the defence combined with a good passing range to extract more from the forwards in terms of goals. If they fail to do so they will keep leaking goals. They will drop many points in their quest for winning the league.

Some key targets for United were Declan Rice and Yives Bissouma. Manchester United needs to do business in January for that defensive midfielder to boost their chances of winning a trophy this season. 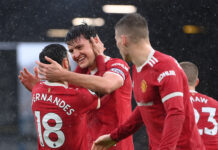 Manchester United Survives Scare Against Omonoia: 5 Things We Have Learned